Thought I should take a moment today to write this congratulatory post to William H. Marcum, Jr!

–
Who’s “William H. Marcum”, you ask? Well, he’s none other than my wife Suzanne’s “Uncle Harold”. And today, Uncle Harold’s living in Ft. Meyers, FL, approaching 87 years young and is truly a lifetime superfan! But he’s more than just your average lifetime sports fan and he could prove it if he didn’t prefer to so modestly reference some of what he’s done over the years!
–
Just so you know, this isn’t another “man-cave” story where memorabilia collected over a lifetime elevates you to an all-expense weekend at a home game in Pittsburgh. This is football lore type stuff!
And with Tampa Bay winning the NFC Championship game last Sunday and now “hosting” Kansas City in the upcoming Super Bowl this unassuming gentlemen’s story is relevant more today than it’s ever been.
–
So, this morning I asked my mother-in-law Sue if we could call her brother Harold to congratulate him on Tampa Bay’s win yesterday and we did. I asked him where I could find a summary of “his story”…maybe something he’d written or saved in a document somewhere that I could use as a reference for this post. Harold referred me to a book written about how the Tampa Bay Buccaneers came to be: “The Yucks! Two Years in Tampa with the Losingest Team in NFL History” – by Jason Vuic
–
I’ve included some pictures from the legendary gameday program below (from August 10, 1968, at 8 pm) but this story is much too big for a simple FB post. You can find the book at the Amazon link below. It allows you to open the link and read the entire book.
–
Regardless, enjoy this NFL precursor to the big game coming up in a couple of weeks. I promise it’s a story you’ve never heard before.
–
I’ve tagged Uncle Harold on this post too! FYI, as a promoter, he was known to all as “Bill Marcum”.
Please post comments if you would and let “Harold” know how significant his effort to bring football to Tampa, Florida truly was. Thanks, Harold, enjoy the big game everyone! – Thanks for taking the time to read this! – Jim Simpson
=======================
Opening paragraph from chapter one of the book:
Bill Marcum was a promoter–not your smooth-talking, backslapping, sell-anything-to-anyone type of promoter–but a promoter nonetheless. His product was football, professional football. The thirty-three-year-old’s plan, in early 1967, was to bring his hometown something it had never seen before: a preseason exhibition game featuring two teams from the National Football League (NFL).
==================
You can find it on Amazon: “The Yucks! Two Years in Tampa with the Losingest Team in NFL History” – by Jason Vuic
– 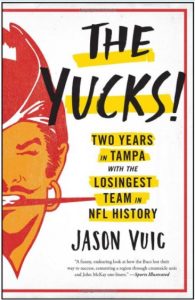 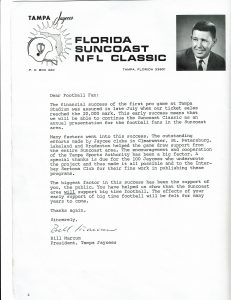 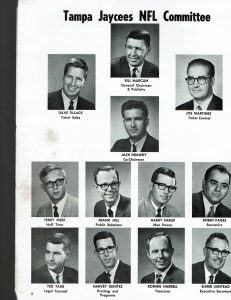